Cheshunt Boxing Club will be in the headlines of this weeks Hertfordshire Mercury Newspaper for appointing a new Club Captain, Shellie Oliver, and for Senior Novices success! Here's the article:

CHESHUNT Boxing Club have appointed a female captain for the first time its history.

Twenty-three-old Shellie Oliver has been given the responsibility of leading and giving advice to fighters at the club .

She follows in the footsteps of past captains such as Phill Gill and recently turned professional Dave Leo.

Cheshunt head coach Mark Bliss said of the landmark decision: “There’s no one that deserves this more than Shellie.

“When she first came to the club she weighed in at 108kg and after all her hard work, she is now down to just 72kg.

“Everyone at the club respects Shellie and is held in very high esteem.” 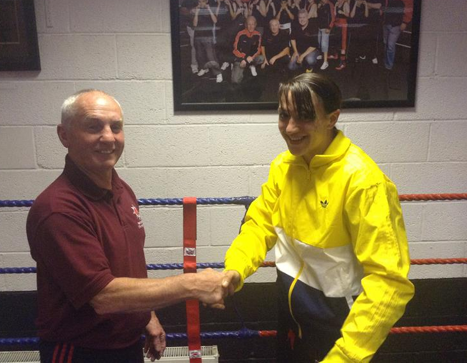 Harrison, aged 17, was boxing in his first senior bout. He was thrown in at the deep end against experienced 32-year-old Nate Canoville of Jubilee ABC.

The Cheshunt pugilist started the first round well, but his older and stronger opponent came into it in the second and third rounds.

However in his first venture over four rounds, Harrison finished the bout strongly to take a unanimous decision from the judges and claim the Home Counties Senior Novices ABA light middleweight championship title.

Cheshunt Boxing Club would like to congratulate Shellie Oliver on becoming Club Captain and would like to give their full support to Tom Harrison who is boxing in the next round of the Senior Novices over the upcoming weekend.

The Cheshunt Boxing Club will be holding a show on Saturday 14th December 2013 as a special Christmas Dinner show. Posters will be going up around Cheshunt about this Dinner Show nearer the time and bookings will be available soon!

The same message has been posted on our Upcoming Shows page

The Cheshunt Boxing Club has been closed for three weeks now and the summer break is now over for all. As we mentioned in our previous update, training sessions will be changed until September 2nd so a few other bits and bob can be done around the gym. Here's the details you need to know:

Training sessions are on, on Tuesdays and Fridays until the 2nd September.

We expect to see al our boxers down on these nights and expect to see the keep fitters back on Tuesdays and Fridays. The Sunday run hasn't yet started but from the week commencing on the 2nd September all training sessions will be back to normal.

During this time there will be no training at all for anyone during the gym. The gym will then re-open on the 18th August however training times will be temporily changed (information on this coming during the closure).

We hope to see everyone back and ready for training on the 18th August 2013 as we'll be training for the new season which does starts in September. Be ready!